Charlotte has been in her boots and bar for two weeks now, so I thought I'd update everyone on how she's doing. The first several days (and nights!) were dreadful. She was so upset and uncomfortable and her right heel kept slipping out of the shoe. I was having to re-thread her straps a few times a day, and I was worried about the "extra" time she was spending out of them when I had to do that. I called Dr. Jex's nurse and, after talking with him, she scheduled us to come in for another appointment that Thursday (one week after the initial placement in the brace).
Dr. Jex recommended leaving her sock(s) off in order to get the shoes put on tighter. I didn't like this idea because after just the first day in the brace (with no socks) Charlotte developed a small blister on her toe. I was worried that she would get many blisters and be even more uncomfortable. We went downstairs to the orthotic & prosthetics clinic and the orthotist was great! He gave us a size smaller shoe (000) and said to put her sock back on. He also narrowed the length of the bar which helped it fit in her car seat better. It still took a few days after getting the new shoes for her to fully adjust to the brace, but she was no longer slipping out of the shoes which made me happy!
Disclaimer: I'm not advising anyone to go against the instructions of their doctor. I am not a medical professional and cannot give medical advice.
We got into a routine of allowing free time just before bed, with a bath every other night. We've been keeping her out for about 30 minutes each day, and she absolutely loves it! She is always so happy during free time and even happier in the bathtub! She even rolled from her belly to her back for the first time during her time out of the shoes earlier this week. 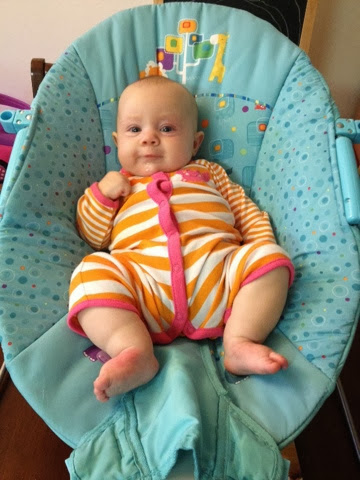 Charlotte enjoying her brace-free time!
While I never expected this transition to take nearly two weeks, I'm so proud of how well she's doing. I won't lie and say it was easy. It was far from easy. Many times, I felt like such a bad person forcing my crying child into the "contraption" that is the brace. Many times, I cried right along with her. I lost a lot of sleep and probably wasn't the nicest person to be around. However, I know it's in Charlotte's best interest and she'll thank me someday when she's older. I'm looking forward (but NOT rushing) to seeing her walk, run, play sports. Watching her run around with her brother or her friends, teaching her how to ride a bike, and seeing her just be a normal kid!
I don't think I'll ever be able to fully express my gratitude for the treatment she has received. I'm thankful for the loving God that I serve who is answering our prayers through the hands of doctors. I'm thankful for the MANY people who have prayed for and encouraged us thus far. We couldn't do this without all of you! We love you all!
Posted by Tiffany at 6:48 PM No comments:

Graduating to the Boots & Bar

Charlotte had her last cast removed this morning at her post-op appointment with Dr. Jex.  The doctor sent us downstairs to the orthotics & prosthetics clinic to pick up the brace and then we went back up to his clinic so he could show us how to put it on.

It was so nice to see both of Charlotte's feet/legs for a little while, and I could tell that she enjoyed being out of the cast.  Unfortunately, her right leg is very sensitive to the touch, having not been exposed to any sort of feeling for so many weeks.  She cried at even the slightest touch and I felt like she was a fragile newborn all over again. 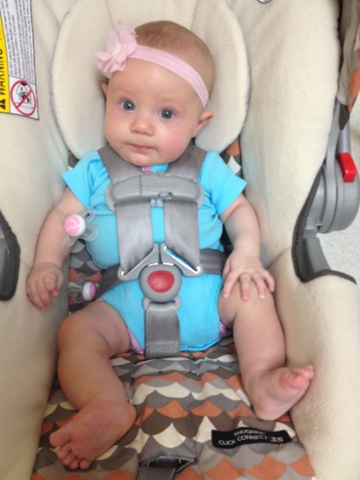 Charlotte after her last cast was removed before being placed in the Mitchell shoes & Ponseti bar.

Before we left, Dr. Jex showed me how to put her shoes on.  Her heel has to be completely down and back in the shoe in order for it to fit properly.  The shoe has three leather straps and Dr. Jex explained that the middle strap is the most significant one for keeping her foot in the "down and back" position.  He called it the workhorse strap and stressed the importance of getting it nice and tight.  He doesn't want her to wear socks for the first few days until we can get the hang of getting the shoes on correctly; he wants us to be able to check her toes for circulation. Charlotte was over tired and not a happy camper.  I felt so bad for her.  She cried and screamed the whole time with big crocodile tears rolling down her cheeks.  Then, Dr. Jex wanted me to put the shoes on while he observed to make sure I was doing it correctly.  I felt like even more of a monster, trying to hold her foot still while tightening the straps, and she continued to cry the most heartwrenching cry I've ever heard.

I know that this treatment is for the best and that it's necessary for her to live an active and healthy lifestyle.  I also know that she will only have to wear this brace for a very short period of time, relatively.  All that said, it doesn't make hearing your baby cry any easier.  I felt like crying with her.  Fortunately, I know she is strong and she will adapt to this new phase just as she has before.  She's an incredibly brave little girl and I'm so proud of how well she has done thus far.  I can't wait to share this blog with her someday when she's older so she can see just how far she's come. 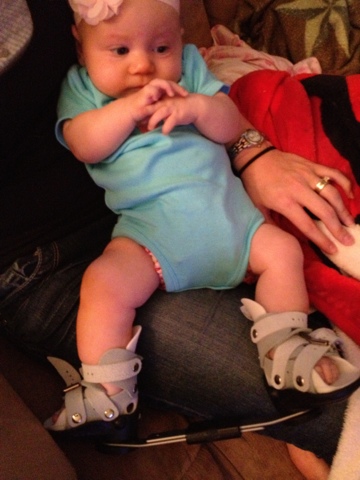 Relaxing at home in her boots and bar.
Posted by Tiffany at 7:10 PM 1 comment: 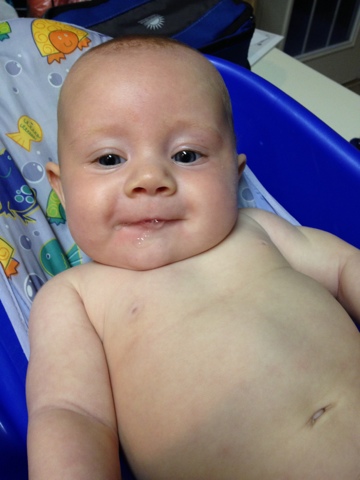 Pretty girl getting ready for her bath.
Before having a baby with club foot, I never could have imagined all the things that parents of "normal" babies take for granted. One of those things is giving your baby a bath. When my first born (Rowen, now almost 3 years old) was fussy as a baby and all his needs were met, sometimes I'd give him a warm bath to help soothe him. The lavender scented baby wash and warm water had a calming effect that would usually settle him down.
With Charlotte, it's not quite so easy. I can't just let her soak in the bath because her cast can't get wet. Fortunately, she's been a fairly content baby and I have only desired to be able to give her a soothing bath a couple of times. Still, she gets sweaty and spits up sometimes so occasional baths are necessary. I wanted to write this post to explain briefly how I go about bathing her and keeping her cast dry.
My infant bath tub has a mesh hammock-like insert that's used for newborn babies. This little device has been a lifesaver when it comes to giving Charlotte a bath. I usually just fill a small bowl with warm water and sponge it over her body while she lays (fully supported) in the hammock. Her cast sometimes dangles over the side of the hammock and other times he holds it up. Either way, the water washes off of her and into the bottom of the tub, but her cast is elevated enough that it doesn't get wet. She actually loves bath time and it's a great way to help her relax before bed. And who doesn't love the smell of a clean baby?! 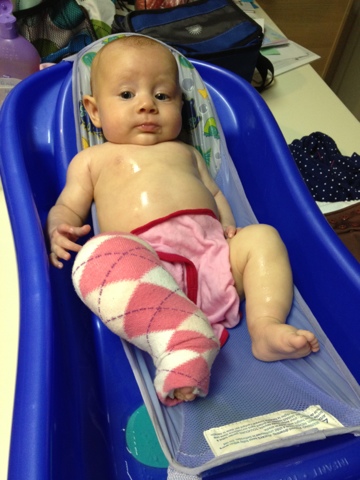 The hammock helps support her body while still keeping her cast away from the water.
If you're the parent of a child with club foot and have other tips and tricks for making everyday tasks easier please comment below or email me at ydid4.7@gmail.com. Or if you have questions about certain tasks, ask away! Charlotte and I are still pretty new to this journey, but I'm happy to share the things I'm learning along the way. I hope this blog is helpful and informative to my readers.
Posted by Tiffany at 9:38 PM No comments: