It was bound to happen sometime. Actually, it's happened several times since Charlotte got her first cast almost 2 weeks ago: a stranger asking "what happened".  I know they mean well and that they're just curious, but there's always a part of me that gets defensive thinking that they are insinuating that somehow my newborn got hurt.

Sometimes, when I'm feeling particularly witty, I feel like saying, "Oh, she was just playing too hard at the playground" or "She forgot to wear her non-slip shoes at work". But I don't. Instead, I try to inform them about what clubfoot is and explain how treatable it is. I often feel like a broken record, repeating myself to new people all the time. Maybe I should carry a business card full of information about clubfoot...

The truth is, I like it when people ask about her cast. It gives me the opportunity to talk to them about her and about clubfoot. Often times, people have heard of it before but don't really understand what it is. I enjoy explaining it to them and teaching them something new. I hope to help raise awareness of it, not just here in the U.S., but also around the world. It breaks my heart knowing that there are children in other countries who are left immobile because treatment for clubfoot doesn't exist where they live. So, until children everywhere can receive proper (and fairly inexpensive) treatment for this defect, I welcome any and all questions from curious strangers.

P.S. Check out this website if you're interested in helping fund a project that will focus on clubfoot treatment in other countries.
Posted by Tiffany at 9:12 PM 4 comments:

I took Charlotte back to Bethesda today for her second cast. First, they had to cut off the old one. I was nervous at first, but then the technician explained that (somehow) the blade only cuts when it comes in contact with hard surfaces, so it wouldn't cut her skin. She was such a trooper and didn't cry one bit while the technician was cutting it off. 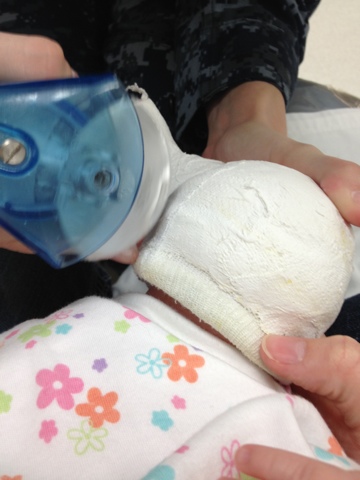 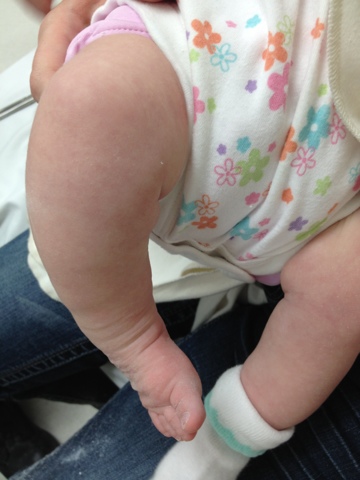 Unfortunately, I can't say the same for the rest of the appointment. Charlotte was quite upset the whole time Dr. Jex was stretching her foot and placing her second cast. We even had to stop halfway through so I could nurse her, but that only calmed her down briefly. I felt so bad for her and for the doctor, because I'm sure it was difficult to properly place a cast on a squirmy, crying baby. 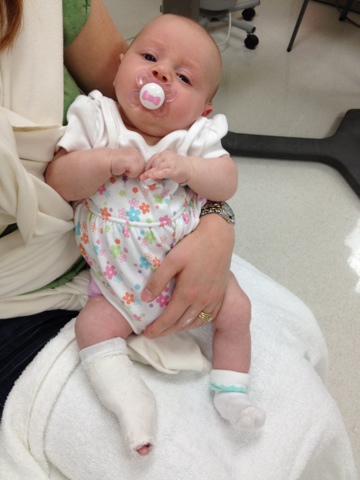 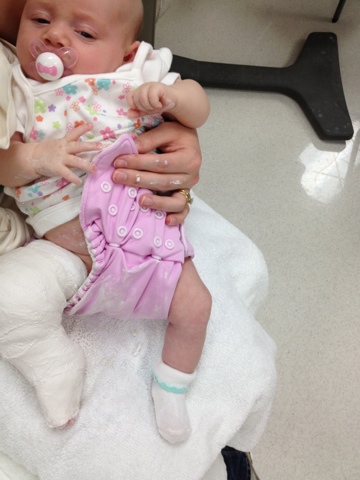 She was even more uncomfortable today than after her first cast. A dose of Tylenol and several nursing sessions later, she's finally down for the night. Hopefully, we can both get some sleep.
Posted by Tiffany at 8:23 PM 1 comment:

Leg Warmers on a Budget

Leg warmers are such a great accessory for babies with casts! They keep the casts clean and, more importantly, make them look A-dorable!! But those simple little things will run parents anywhere from $10-20 (or more) per pair! I want my princess to look cute rockin' her casts, but I can't afford that! Thankfully, I have a sewing machine and the internet!

I found a great tutorial online that showed how to make leg warmers out of crew cut socks (or knee-length socks for a larger size warmer). Charlotte and I headed out to Target to pick up some socks! We found some great patterns at just $3 a pair! I made 4 pairs total in about 2 hours time! That's 8 individual warmers and since Charlotte only has one cast, that's enough for 8 days of wear (or less if they get dirty, and let's be honest, she's a baby so they probably will)! And I still have 4 more pairs of socks yet to convert! That means she'll have 16 leg warmers for less than $25! Frugal Momma win! 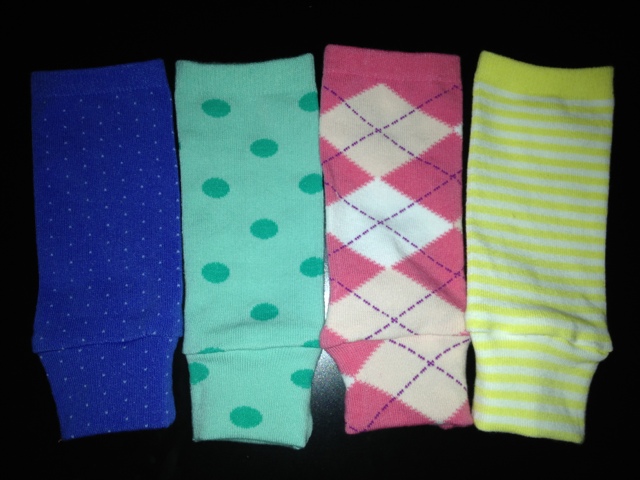 Charlotte was really having a hard time getting comfortable yesterday afternoon. She would rest briefly and then wake up crying in what seemed like pain. We knew she would need some time to adjust to the cast, but it really stinks when your baby is in pain and you feel helpless.
After dinner, Zach figured out the problem. Her little left foot was rubbing up against the rough, plaster of her cast and it was scraping her. We put a sock on her left foot and a leg warmer over her cast and she fell right to sleep and slept the rest of the evening. She even went to bed without much trouble and slept all night, waking only to nurse a couple of times. 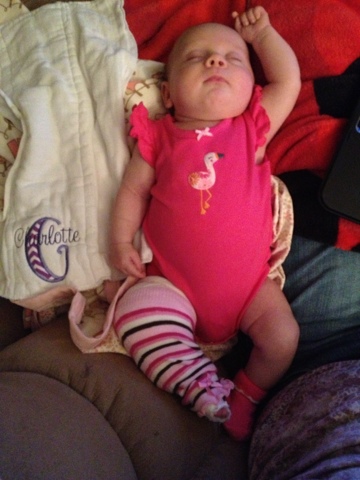 I'm so grateful that we (might) have figured out what was causing her so much discomfort. Hopefully, we can keep her happy and comfortable while she continues to adjust to this new phase. As always, thanks for your prayers for our precious princess!
Posted by Tiffany at 7:57 AM No comments: 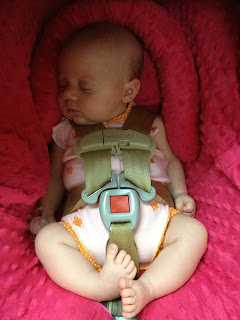 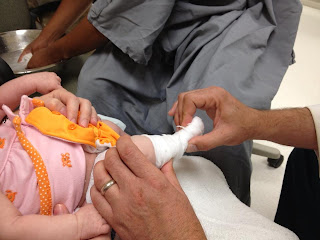 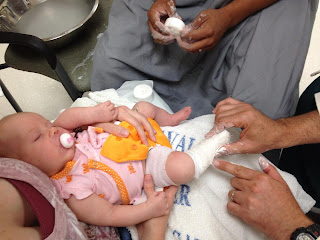 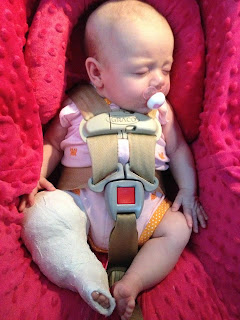 Charlotte has been somewhat uncomfortable this afternoon as she adjusts to having this big, plaster cast on her leg.  Hopefully, it will only take a day or two for her to get used to.  I would like to say Thank You to everyone who has been praying for her and for us as we begin this process.  Your prayers are being heard and we appreciate them very much!

This is a quick post describing what is known as the Ponseti Method for correcting clubfeet.  Taken from Ponseti International:


With our treatment these structures are stretched with weekly, gentle manipulations. A plaster cast is applied after each weekly session to retain the degree of correction obtained and to soften the ligaments. Thereby, the displaced bones are gradually brought into the correct alignment.
Five to seven plaster casts extending from the toes to the upper thigh with the knees at right angle should be sufficient to correct the clubfoot deformity. Even the very stiff feet require no more than 8 or 9 plaster casts to obtain maximum correction. Before applying the last plaster cast which is to be worn for three weeks, the Achilles tendon is often cut in an office procedure to complete the correction of the foot. By the time the cast is removed the tendon has regenerated to a proper length.

To prevent relapses, when the last plaster cast is removed a splint must be worn full-time for two to three months and thereafter at night for 3-4 years. The splint consists of a bar (the length of which is the distance between the baby's shoulders) with high top open-toed shoes attached at the ends of the bar in about 70 degrees of external rotation. A strip of plastizote must be glued inside the counter of the shoe above the baby's heel to prevent the shoes from slipping off. The baby may feel uncomfortable at first when trying to alternatively kick the legs. However, the baby soon learns to kick both legs simultaneously and feels comfortable. In children with only one clubfoot, the shoe for the normal foot is fixed on the bar in 40 degrees of external rotation. During the daytime the children wear regular shoes.

Our daughter Charlotte was, quite honestly, a big surprise! We weren't trying to have a baby when I found out I was pregnant, so the big 'ol plus sign took us a bit off guard. However, we quickly fell in love with the amazing little life growing inside my body. It was so wonderful to be pregnant again, and I was really enjoying feeling those tiny flutters inside my belly. Those perfect little flutters...

On January 31, 2013, we headed to the hospital for our 20-week anatomy ultrasound.  This was also the day we would find out if we were having a boy or a girl.  We had both been feeling like it was a girl, but I was hesitant to get my hopes up. When the ultrasound tech said those words ("You're having a girl") I was elated! I immediately started picturing pink and bows and frills! Zach, not so much, but he came around.

A few days later, I received a phone call from my doctor that no parent ever wants to hear. There was an abnormality on your ultrasound. It appears that the baby's right foot is a clubfoot. I'm going to put in a referral for you to be seen at Walter Reed in Maternal/Fetal Medicine. Umm, what? There's something wrong with my baby? What does a clubfoot mean? Does she not have toes? Can it be fixed? Will she walk? Is it a sign of a more serious abnormality? Is it my fault? These are just a few of the questions that flooded my mind as my eyes filled with tears. 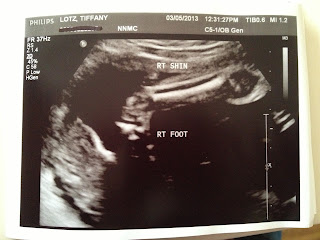 Over the next few months, I was seen for regular ultrasounds at Bethesda to more accurately diagnose the clubfoot and rule out any other problems.  I did my research on the internet and learned that clubfoot is a very treatable birth deformity.  This, along with my faith, gave me peace in the situation.  We continued to prepare for our princess's arrival.